FREE DHL Express Worldwide Shipping for all the Rubber Straps

Before Technique Avant Garde (TAG) bought Heuer to become Tag Heuer, ,Jack Heuer would release one last watch, the Heuer 2000. Released in 1982, this would be the birth of the Aquaracer calibre 5 concept that we see today in 2022. After Heuer became Tag Heuer, the first official Aquaracer made its debut in 2004 which was significant for Tag Heuer as they did not focus on dive watches, instead they were famous for their motorsport heritage. The 2000 Aquaracer was released with a quartz or automatic movement and offered 300 metres of water resistance, not bad for a watch that back then retailed for 500 dollars. The circular hour markers and sword hands were both filled with lume and it featured a unidirectional dive bezel made from aluminium.. 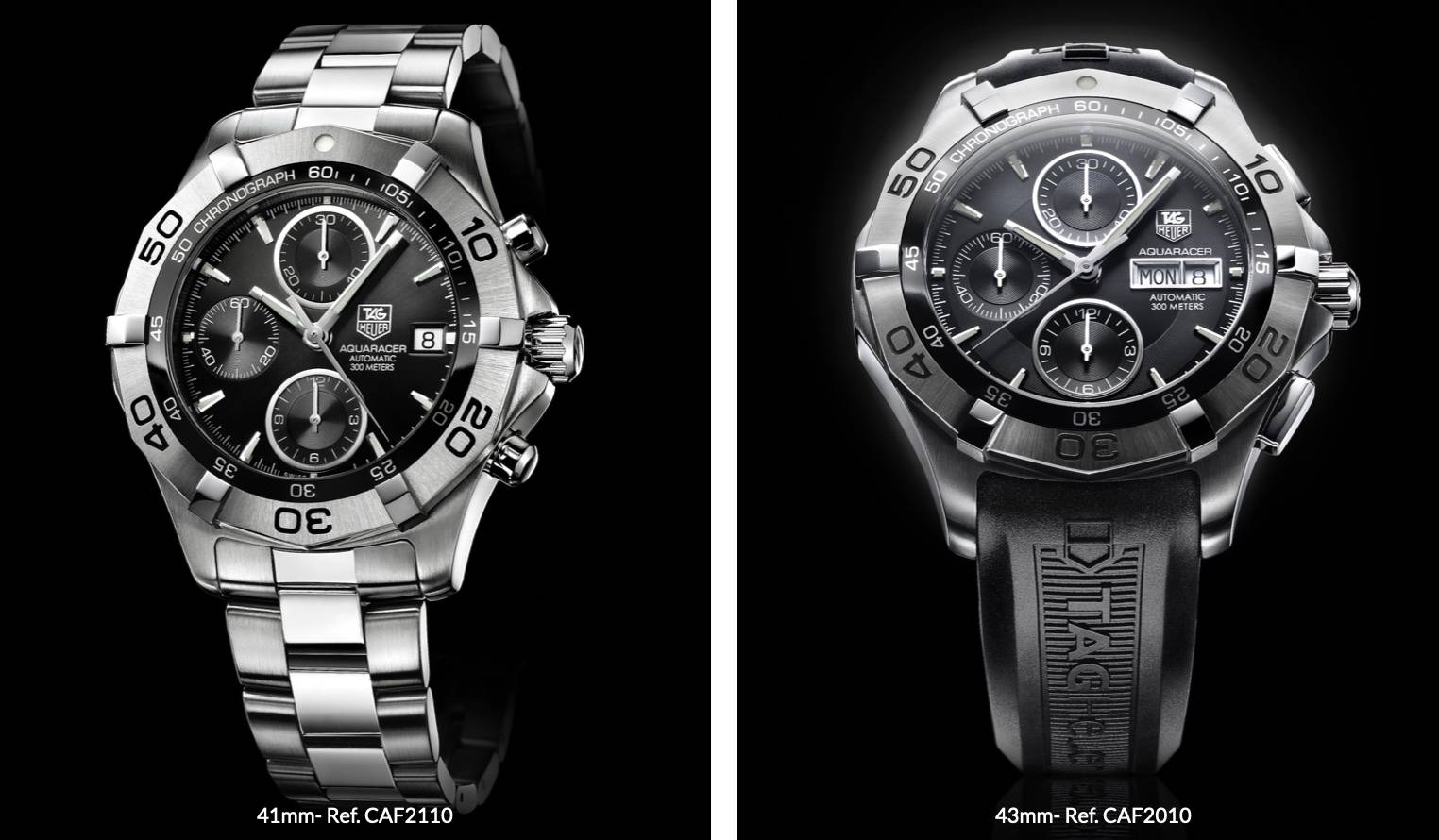 The 2000 Aquaracer was successful and in 2005 they renamed it to the Aquaracer 300m. Not a massive change in the name but Tag Heuer really wanted to market their watches to more people and attract people who were just benign to start looking into watches. The Aquaracer 300m had two case size options like its predecessor, in 38mm or in 41mm. Tag  Heuer also kept the option of an automatic or quartz movement available to people.

Beggining of the tag Heuer story

Tag Heuer went on to see huge amounts of success with their Aquaracer 300m and so they kept the same name through to 2009. Again, like the previous generation they kept the same two case sizes available, the 38 mm for the quartz movement and 41mm for the automatic one. However, the newest addition to the Aquaracer line was the addition of a chronograph in 2005. This was also surprisingly only available in 41mm which was odd for the time as Tag Heuer normally offered chronographs in 43mm.

Tag Heuer was determined to provide a dive watch that anyone could wear and more importantly, wanted to wear. From 2005 to 2008 they kept on adding more chronographs as they were one of their most popular models not just in the Aquaracer line up but their whole entire watch range. The Chronograph reference CAF2010 had either a royal blue or grey dial with the option of either a date or day-date function. One thing to note with the day-date, it only came in a 43mm case size.

In 2006 Tag heuer made some changes to the Aquaracer line, the biggest change was they started to use colour on the Tag Heuer logo on the dial. Their new 38mm Aquaracer looked extremely similar to the model Jack Heuer first released with its dodecagon (12 sided) bezel made from brushed and polished steel. Thai time the bezel featured larger polished minute markers and the numbers were made larger with deeper engravings for greater legibility. The new deal was a sunburst steel with Tag Heuer’ new stick hour markers filled with lume. 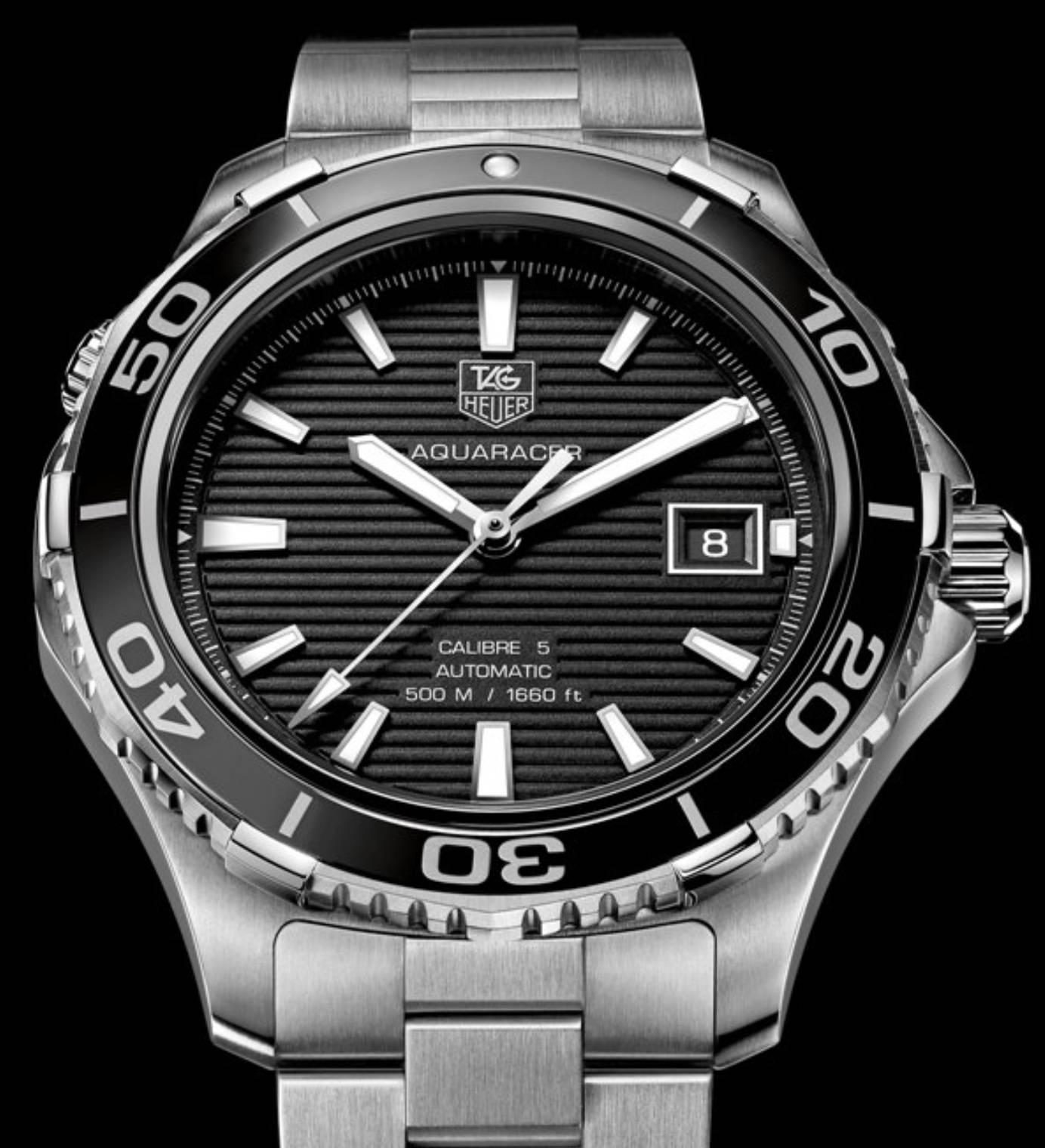 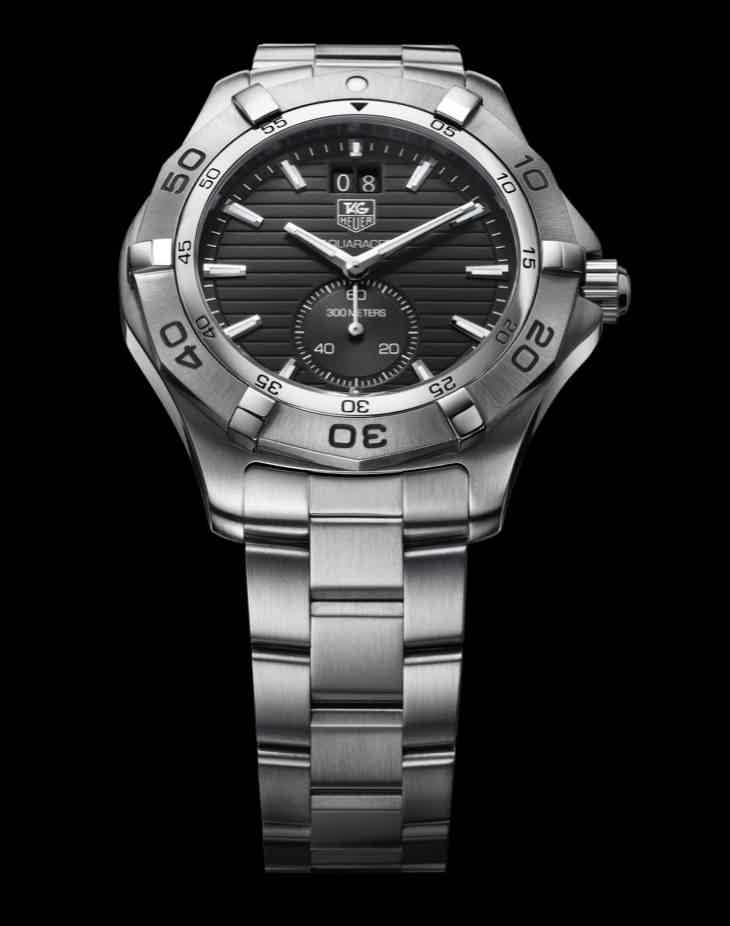 This design was continued on the hands with them also being in a stick shape filled with lume. However if you opted for the automatic mechanical movement from Tag Heuer, the case, like before, increased to 41mm and you did not have a coloured Tag Heuer logo. Tag Heuer differentiated the quartz watches with a coloured logo whilst the mechanical watches received a monochrome and less fussy logo.

Another way to differentiate their quartz from the automatic movement was by the dial on the watch. Tag Heuer had a tendency to put more effort into their automatic dials, they offered them with a ‘Clous de Paris’ design which takes inspiration from the famous tappersies dial that Audemars Piguet are famously known for.

Towards the end of 2007 the calibre 5 started to be used inside their automatic watches whilst the quartz watches featured various types of ETA and Sellita movements. The calibre S was used inside their Grand Dates which used the carrera calibre 16 case, but these were only a short production.

They were Aquaracers that featured a dual time zone and date function however this made the watch extremely thick at just under 15mm and with a case diameter of 43mm, you really had to have a large wrist to wear it comfortably. Hence, it was after thai that Tag Heuer decided it was time to design more of a variety designed to be worn by most people so they started to make them thinner and more wearable.

First major evolution for the aquaracer

Tag Heuer continued to update and change minor details across their Aquaracer 300m until the end of 2009. This would prove to be the foundation for the Tag Heuer Aquaracer Calibre 5 that had a very successful run. From 2009 to 2012, they released the Aquaracer calibre 5 500m (reference WAJ2110). Not only were there new movements but their water resistance massively increased from 300m to 500m, as the name would suggest. The case shape became more angular and featured a rubber or three link bracelet.

The rubber strap was made in balck rubber with a tappersie waffle-esque design with the outline of the classic Tag Heuer shield logo at the top. This complemented the black striped dial and bezel that was also made from rubber. This really was designed to be a rugged tool watch you would choose to wear when doing any type of water sport or just a watch you can wear no matter what you were doing. 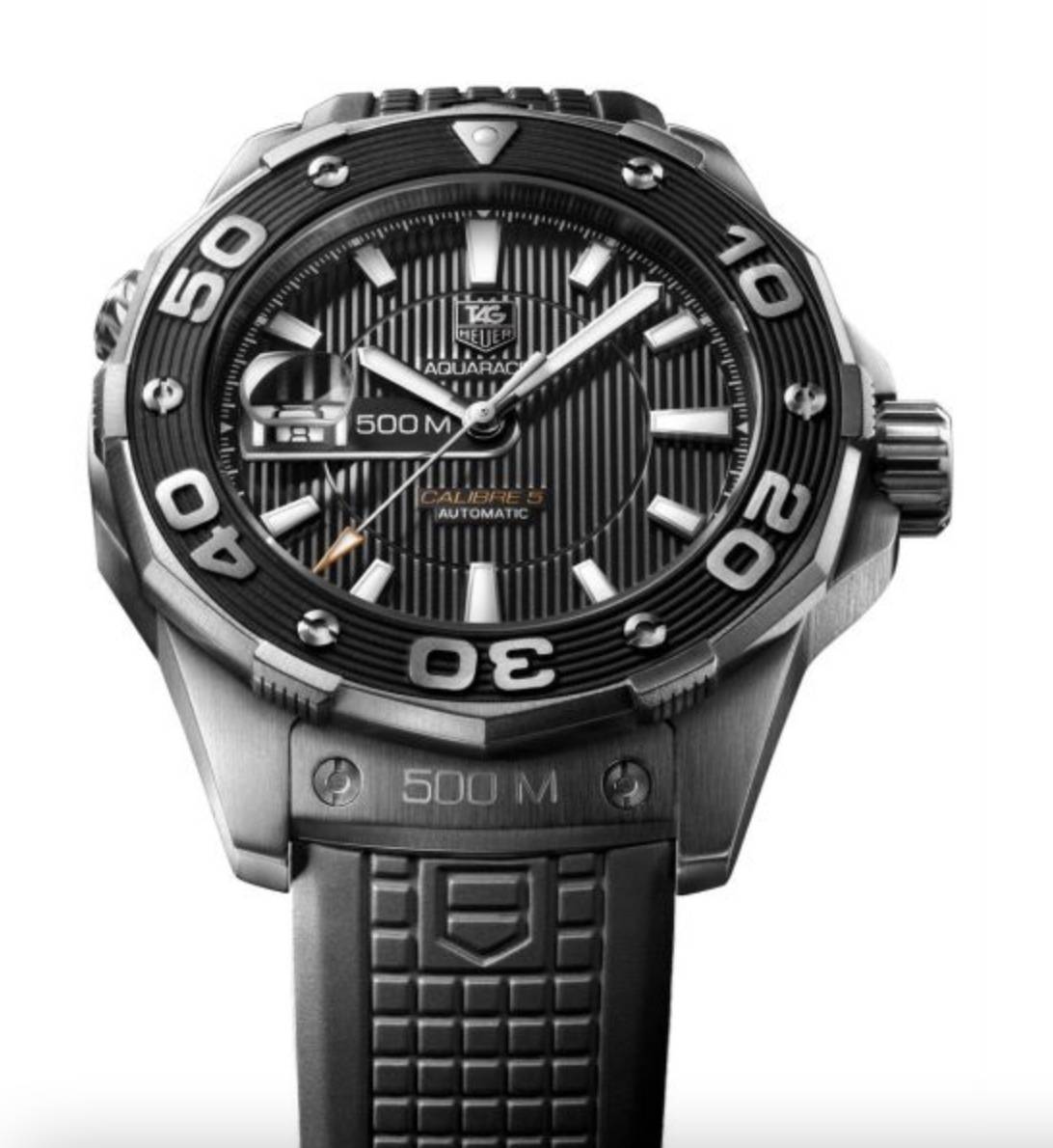 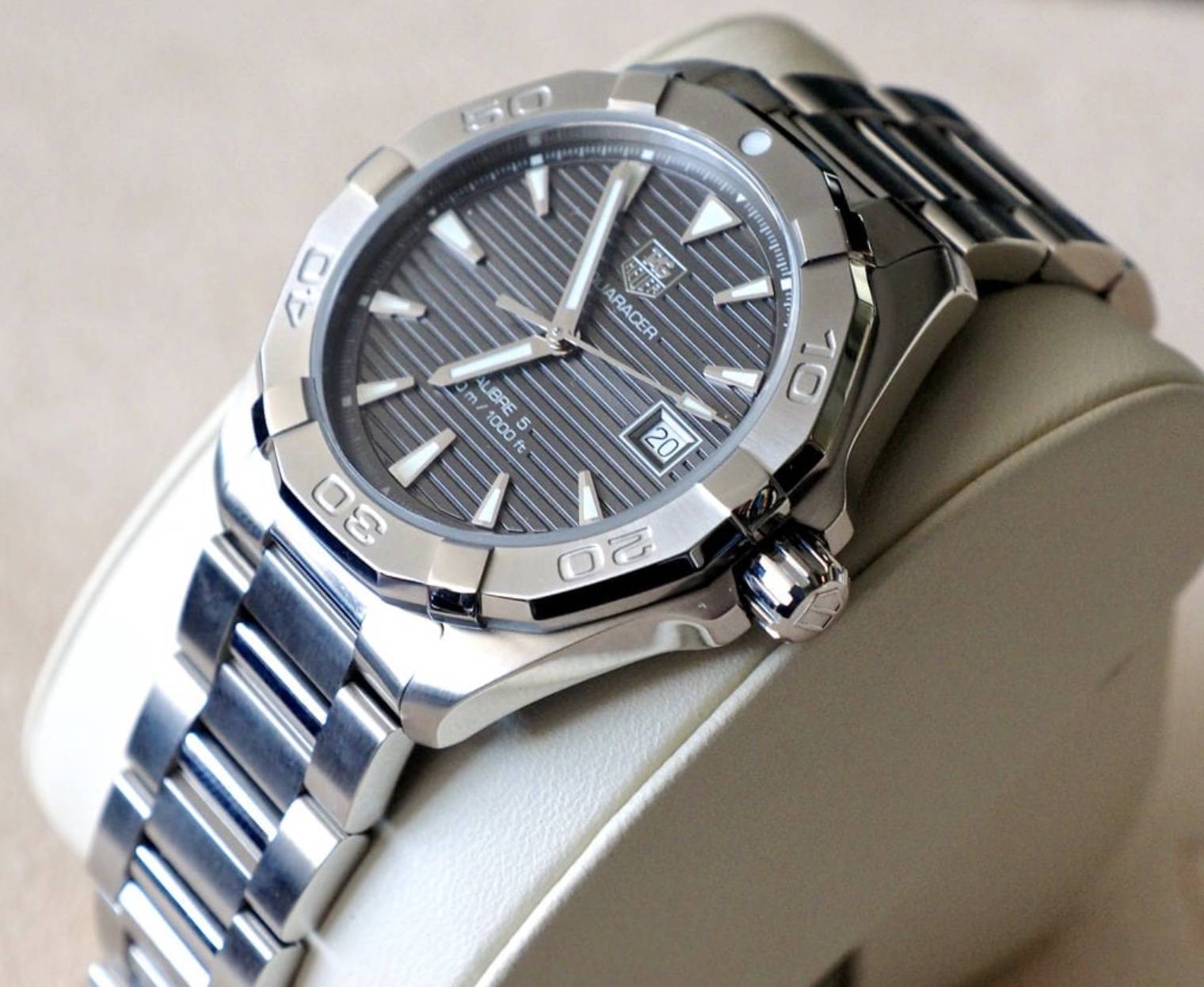 You can get the WAJ2110 in several different dial and bezel colours including black, clue and a rose gold tone with either the rubber strap or a polished three link bracelet from the chronographs. These all feature the calibre 5, or 16 for the chronograph  inside of them and a helium escape valve similar at the 10 o’clock position. The case was either made from steel or a blackened titanium if you wanted to go for a full balck look, black case, rubber strap and dial. Tag Heuer were slowly redesigning the Aquaracer resembling less and less from the precious old and original 2000 series. The more angular case and design with the same look stranslating over to the bezel. Tag Heuer really invested in their R&D for making the Aquaracer look and perform to the modern day standards of its time.

Similar to the Aquaracer 500m, Tag Heuer also released the Aquaracer 300m at the same time, and again, as the name would suggest it was water resistant to 300m. This was of course a sports dive watch but the design was far more elegant than the 500m version. The case was more curved, paying tribute to its older siblings from the 2000 series. They only came in steel with a brushed three link bracelet and you could choose either a black, blue or white dial. Tag Heuer still wanted to keep part of the Aquaracer line similar to the old pens to give people as much choice as possible.

In 2012, we saw another large update for the Aquaracer line with its aesthetics changing quitte significantly. The Generation 3 500m (reference WAK2110) came to life and took inspiration from the design of the Aquaracer 300 combined with the performance of the 500m. This version had a less angular case shape with its smooth polished case side and three link brushed bracelet. The bracelet only features polished  centre links if you choose the blue dial and two tone steel and gold case. The dial was re-designed to have a more classic look and for the first time ever, Tag Heuer inserted a ceramic bezel onto the Aquaracer line to make it more starch resistant, harder wearing and last longer. You could still get a chronograph function for your Aquaracer but instead of a 41mm case size for your classic date and time model, you were now upto 43mm.

2014 was the year we saw the Aquaracer calibre 5 as we know today. It has been a long and successful run for Tag Heuer and it was only up until 2021 and 2022 that they made any significant changes. The precious Aquaracer 500 was discontinued and a new line and generation of quarters were created. You now had two designs of the Aquaracer 300, one featuring a steel bezel (reference WAY2110) and one with a ceramic bezel (reference WAY211A). The dials now had horizontal stripes in them, a well known successful design for dive watches as it is designed to evoke the look of the wooden deck on a yacht. The hour markers were polished triangles with lume for greater legibility along with a date window at the 3 o’clock position. Tag Heuer also created a ‘pepsi’ and ‘batman’ GMT aw well into their Aquaracer line-up however these were discontinued just a few years later. 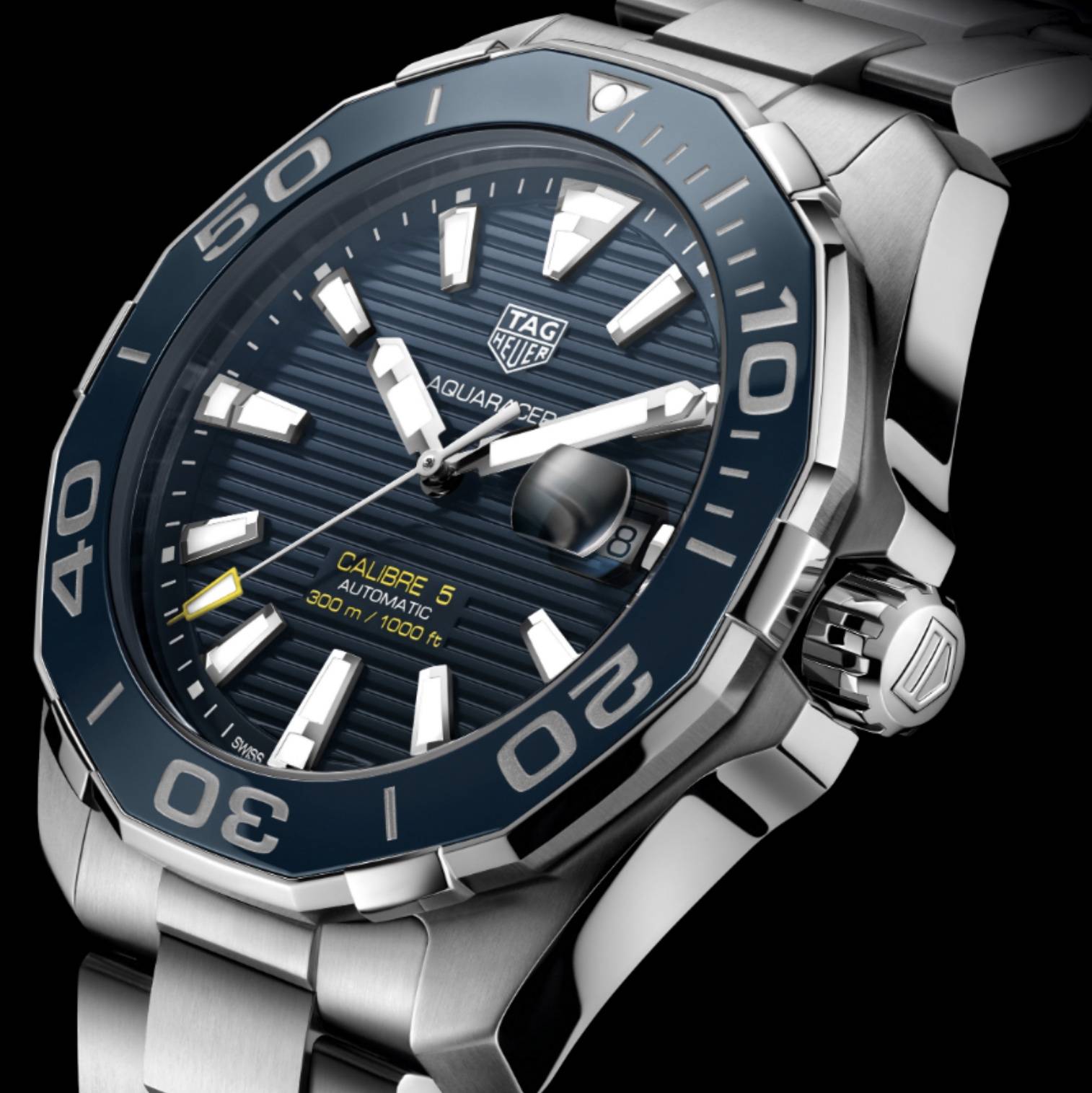 second major evolution for the aquaracer

The steel bezel Aquaracer (WAY2110) was made in a steel case 40.5mm case with either a blue or black dial to choose from. The most notable difference on this model compared to another previously made Aquaracer was the ‘H’ link style bracelet. Tag Heuer usually reserved the ‘H’ link bracelet for the carrera line-up but it certainly made the Aquaracer look more elegant and refined. The ceramic bezel model had the classic three link bracelet that has largely remained the same since they released the initial series 2000. Regardless of the different models, they all now came with the calibre 5 ticking indie of them and this would be the same calibre Tag Heuer would continue to use even today in 2022. 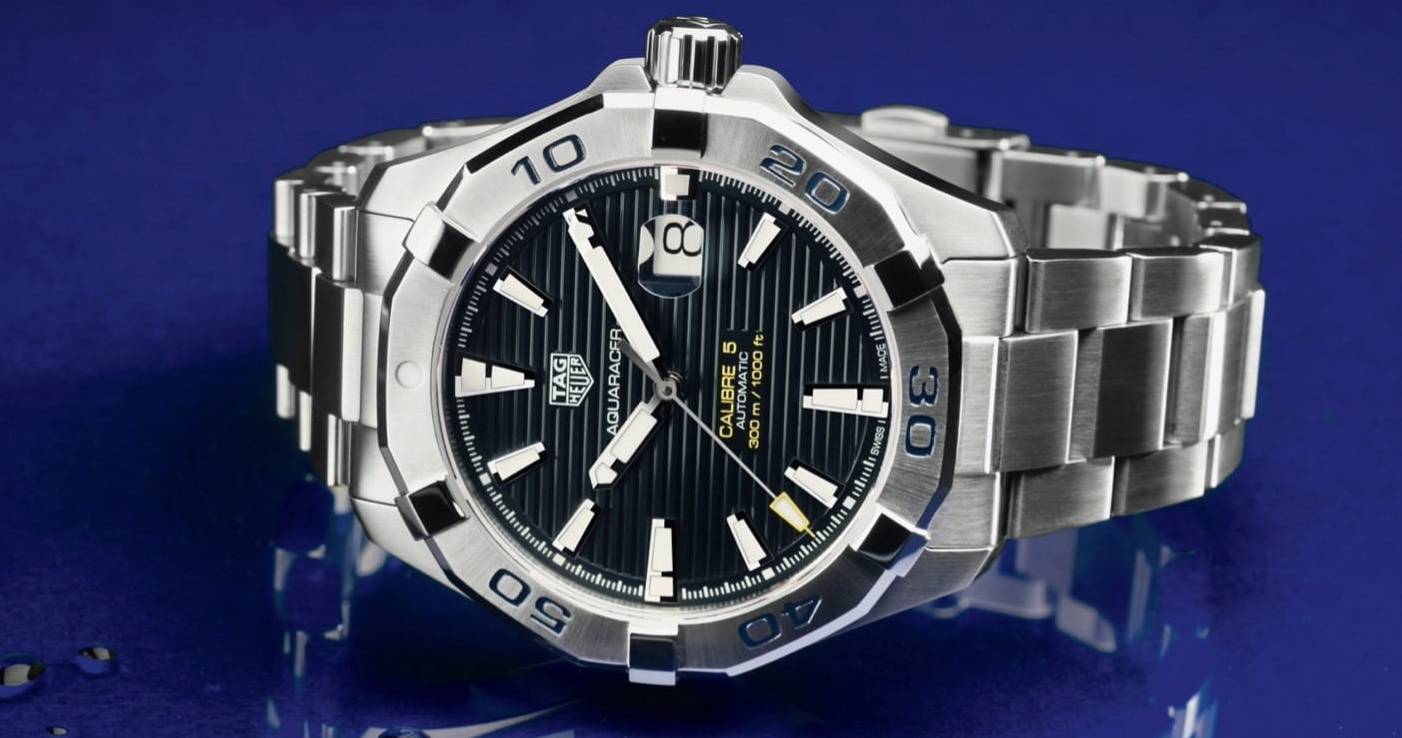 2017 saw some new addition to the Aquaracer calibre 5 line up but for the most part it was the same collection as it was in 2014. The Aquaracer was one of Tag Heuer most successful ranges, hence they did not want to change something that people liked and worked well. The new reference was now WBD2110 and the only difference was the addition of a lume dot at the 12 o’clock position on the bezel. The new additions came in the form of Chronographs featuring a steel bezel with the calibre 16 powering them. The 43mm case size made them significantly larger than the regular time and date models but thanks to Tag Heuer clever engineering, they would try and make the bezel and case slightly thinner to improve its wearbility over previous generations. The steel bezel versions were slightly refined again with the ‘H’ link bracelet being dropped and switching over to there three link bracelet with polished centre linsk to complement the polished markings on the bezel. 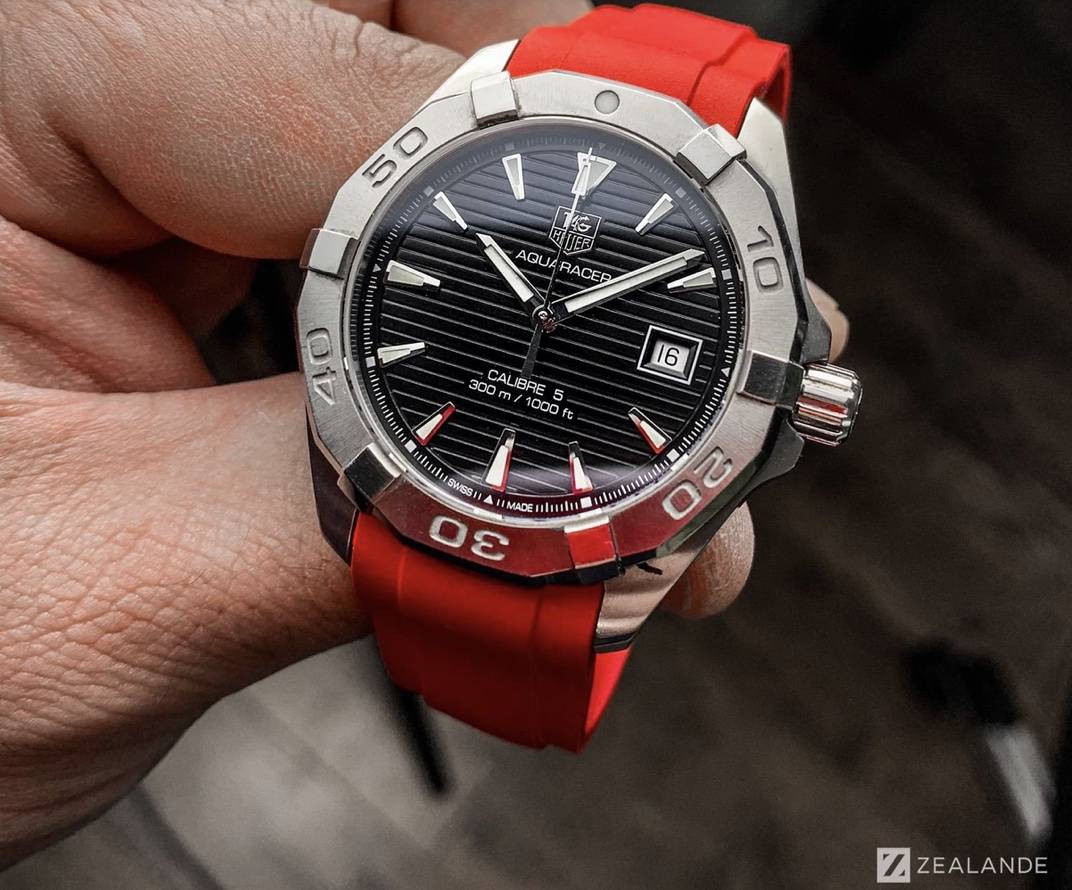 In 2020 Tag Heuer completely redesigned the Aquaracer, the case shape, bezel and the controversial new date position. The Aquaracer (300 reference) featured the same calibre 5 movement with a similar blue, black or green dial. However, the 6 o’clock date posting with a bumble date window was quite a visual change to what everyone knew, hence many people did not like and Tag Heuer responded very quickly with a new model in 2021. They reverted back to the previous generation and again, did what they did before, refine the models. The Aquaracer 300 has been around for 4 decades and Tag Heuer have continued to make small and minor improvements to ensure they can deliver the best dive watch for the price point.

Thankfully, here at ZEALANDE we can offer you a large strap range of choice in colour and models compatible with your Tag Heuer Aquaracer in 41 mm (WAY11 & WAY211, WBD 111 & WBD 211 models produced before 2020 models) so you can change up the look of your watch. With the Aquaracer being a dive watch, having the option to put it onto a sporty rubber strap gives you the option to wear your Aquaracer in whatever sporting activities you desire. Our straps are made to the highest standards and in Switzerland to pair nicely with the quality of your Swiss watch.

PRODUCTS FEATURED IN THIS ARTICLE

To receive by email our new products, news, promotions, do not hesitate to subscribe to our Newsletter (1 newsletter per week).

Your are successfully subscribed for email notifications.
✖

Notify me when available

We will send you a notification as soon as this product is available again.

Your email is requried